In 1995, the original name of this business was cyberianWOLF Web.  It derived from the chatroom name, cyberWOLF.  The chat room name belonged to a “geek” named Carey Morris.  He was new to Northwest Tennessee and was finding it hard to belong.  Jobs were hard to obtain and nothing seemed to be working out for him, so he decided to learn about web development on his own time.  Eventually, it brought in extra money and as time progressed, he found himself doing, web development, computer repair and networking for his small group of clients. 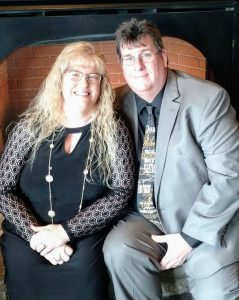 Later in his life, after avoiding it as long as he could, he answered the call into the ministry.  New doors were opened and he decided that it was time the calling on his life needed to reflect in all aspects of his life.  So, as a preacher, he chose another title.  After all, what better name for a geek who was a preacher than GeekPreach.

I guess you know now that GeekPreach is not really a WHAT, it is a WHO,  Bro. Carey Morris.  He and his wife, Janet, have had some kind of leadership or teaching position in the Church since the mid 90’s.  They are very familiar with the mercy and grace of their Heavenly Father.  This ministry is just another way of sharing God’s love with others.  Their lives are continually and forever dedicated to the service of God through Jesus Christ.